If you could see a molecule of CorrosionX, you’d note that it has positive and negative poles (anodes and cathodes), just like metal molecules. The CorrosionX molecules and metal molecules are attracted to each other and form a strong, magnet-like bond. The CorrosionX film spreads and spreads until it forms an incredibly thin coating that is practically weightless. The “magnetic” attraction and capillary action are so strong that CorrosionX goes everyplace moisture goes. It penetrates seams, climbs rivet shanks and generally reaches the tiny spaces where corrosion most often starts. The penetrating power of CorrosionX is also enhanced by this polar bonding characteristic. It helps CorrosionX creep through microscopic voids and over surface irregularities to penetrate between seized surfaces where it softens rust and corrosion deposits to free up frozen parts.

Polar Bonding also makes CorrosionX an outstanding penetrant - better than products made specifically for that purpose. Add that to its lubricating ability (better than products fortified with “Teflon”), and it’s the perfect product for cables, locks and hinges, as well as cannon plugs, micro switches, antenna bases, circuit breakers and connectors, any place where electrical or electronic connections might be subject to moisture or saltwater damage. 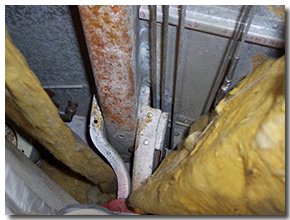